That’s right! I may have graduated but school is still in session. I’ll be heading down to Savannah to do a short master of arts in industrial design program at Savannah College of Art and Design (SCAD). It’s only a year and a quarter but I am very excited to be living in a completely different city all the way down south. Right now I’m packing, and even though I’ve had five years of experience to get this right, it’s still a complete and jumbled mess.

I Did A Lot This Summer

It’s been way busier than I expected for not being employed. My mom and I traveled to China where we spent time in the city I was adopted from and also toured the absolutely sublime and awesome karst mountains of Guilin. Here’s a pic of that:

Since I didn’t have a job but wanted money, I did some freelance residential planting master plans for a few clients. It was way more work than anticipated but it was cool to feel like I owned my own business. Here is my summer workspace: 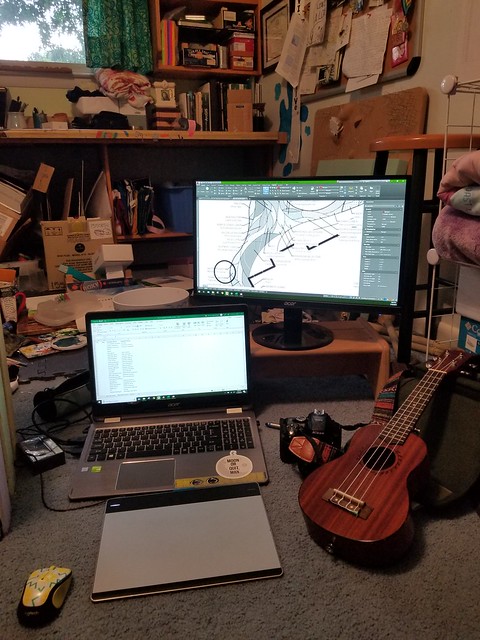 Also, the Log and I went to Algonquin Provincial Park in Ontario, Canada. Actually, he asked if I wanted to come along and I told him that I didn’t really want to be very helpful and he said he still wanted me along anyway. Our campground was next to one of the smaller lakes so it was nice and quiet.

We did a lot of hiking and wandering, but it was too windy to go canoeing which was disappointing. Especially since the logo for the park is a guy carrying a canoe.

Unfortunately, we ended up leaving early because the forecast had predicted rain for the rest of the evening so we couldn’t sit outside and have a fire or really do much of anything without getting soaked. It’s ok though because we saw a moose on the way out of the park! Very exciting! Also, we stopped at the filming location for the motel in the TV show, Schitt’s Creek. It was pretty cool!

Here is a picture of the motel.

We also stopped at Niagara Falls. Amazing! But it’s kind of disappointing how close the buildings get to the falls and river.

What else… I hung out with Log and his cool family during their vacation. We went fishing and hiking and winery touring! I also got to spend a week with Log, moving him in to his new apartment outside of DC before he started his swanky new job. We were both sick for the whole week but still managed to see the Smithsonian, the zoo, walk around the National Mall, and spend a day in Georgetown where Log’s office is located.

I also planted a rain garden in Camp Hill! 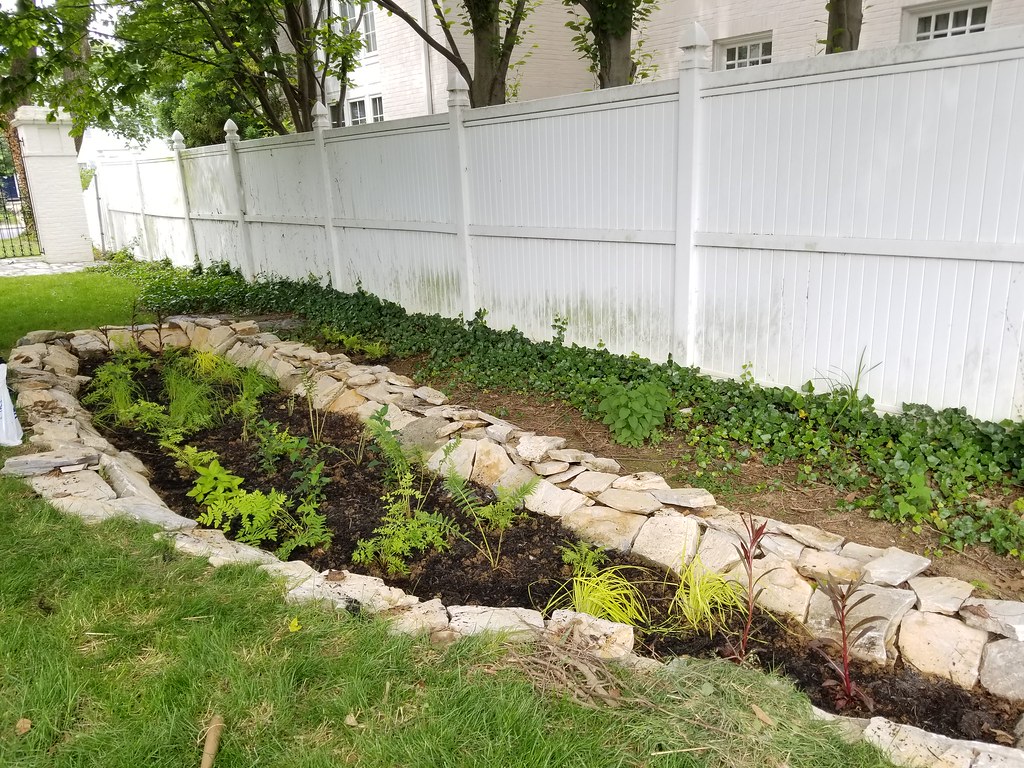 Recently, the family all flew to Texas to visit some family in San Antonio. We walked along the River Walk in the city and saw the Alamo (which was not the most exciting) and the other missions around San Antonio. I had a great time talking with the family and playing with my little cousins!

Most most recently, me and some of my LARCHie friends all went down to Logan’s bay house and we just hung out and talked and had campfires on the beach. A final get together before I have to head down!

Today I am baking bread and packing. I’ve been trying to move my life in a more sustainable, less wasteful direction for a while now and there’s lots of waste in food packaging. I’m also trying biodegradable silk dental floss which will be interesting and invested in some mesh, reusable produce bags. I’ve been trying beeswax wrap to replace plastic wrap and got some reusable ziploc bags for my birthday. A present which my sister responded to with, “I used to be jealous of the presents you got.” Or something to that effect. My favorite thing though are my collapsible takeout containers that I bring to restaurants so if I have leftovers, I don’t have to waste the disposable takeouts. I also started carrying around silverware in my backpack and purse, as well as a small cloth napkin. I get quite excited about all of it.

So there you have it! My summer highlights. Stay tuned for next week when we trek down to Savannah.

My family and two of our friends took a vacation to scenic Nova Scotia in Canada. I have written some tidbits of the exciting things we did and saw and what not.

It is about 6:30 and we are driving back from Nova Scotia. We left yesterday and stayed in a hotel in Bangor, Maine. There is about an hour and 20 minutes left on this lengthy, grueling car ride and let me just tell you that my butt is in excruciating discomfort. They say that every hour of sitting takes away a decent chunk of your life and I’m pretty sure my life has shorted considerably after 9 hours of sitting. I recently invested in a fitbit and so far I have only taken 1,618 steps all day. That’s not a lot. Maybe I’ll do some jumping jacks when I get home. Oh man I am ready to get out of this car!

I’m sure that is not the introduction you wanted to start my post about my Nova Scotia vacation, but hey, this is my blog. So let’s start at the beginning instead.

We drove two days up and two days back. But at least we did some pretty interesting stuff in between. On the “notes” app on my phone, I briefly recorded the day’s activities. Here is what I wrote with a minimal amount of additional text and editing because I’m too lazy for that. Pictures are accompanied.

The Shubenacadie river at low tide. See how low the water is?!?! At high tide the bridge piers are mostly under water!

Today we went rafting on the tidal bore on the bay of Fundy. It was crazy! The tide literally looks like a wave that moves in. The tide change on the river we went on was like 20 feet or more! We had to walk in super sticky mud on the river bottom to get to the boats when we started. We also slid down the muddy banks at one place. We rode the swells created by the tidal bore movement over sand bars.

After the excitement of rafting, we headed to the little cottage where we were staying for most of the week.  However, before arriving, we found out the well has basically run out and we had to shower at a youth hostel about 30 min away. The house is really cute but it would be nicer if we had water.

Today we hung around the house. I did a drawing while sitting on the dock and I am kinda happy with it. Later in the day we went to carter’s beach which was GORGEOUS.

Some guys came to fix our well so we got a little more water. Also we had a DELICIOUS breakfast at the port grocer.

We just visited Peggy’s cove and it looks like Yosemite but near the ocean. Glacial landscape with smooth granite slabs. There are signs EVERYWHERE warning people to not stand on the black rocks that are too close to the water because because people get swept off them by rogue waves and dies. Regardless, people could be seen standing within spitting distance of the water. Even though there were people everywhere, it was still amazing, I do like a good large sitting rock. Now we are going to Lunenburg (sp?) which is an old fishing village and UNESCO world heritage site.

Lunenburg was a cool place, but a little disappointing because most of the shops were closed. We did eat lobster at the Fish Shack though and that was delicious!

Today we walked to the port medway lighthouse and the grave yard. The light house was nice and we found some blueberry bushes that were ripe! In the afternoon we drove to Kejimkujic national park seashore and did a hike which was nice because there were a lot of cool plants and trees to identify! We even saw some pitcher plants which were really neat. Unfortunately there were horseflies everywhere! We played ukuleles after dinner and watched Date Night.

Today we are just hanging around the house finally! Emily, Katy, and I went kayaking after breakfast. It was beautiful of course. Now we’re chillin. Tried to look at the stars before we went to bed but the moon was too bright still. Did see a couple of shooting stars.

Statue of “Evangeline,” who symbolizes the of survival of struggle and hardship. Not a real person.

Today we are leaving the house. We are stopping by Grand Pre where the Acadians were kicked out of Canada. Then we are going onward to a bed and bfast place that is close to the fossil cliffs at Jogins. I’m very excited for fossils!!!!

Let me tell you that learning about Grand Pre and the forced removal of the Acadian people really put a bummer on my day. Of course, it is an important piece of history that should not be over looked but still, so depressing and terrible to force these people who were actually doing nothing wrong and had made friends with the local natives and had a thriving subsistence community but then the British were like “I want this land, so get out.” Uncool man.

The Country Stiles B&B, the bed and breakfast place we are staying at, is adorable! And the people were so nice! Very accommodating! Emily and I got to play an organ made in 1903!!!

Today we went to the Jogins fossil cliffs! They were so cool! Fossils everywhere! I loved it! Took way too many pictures Hahahaha! Now we are starting our 5 hour drive across the border back into the US. We are stopping in Bangor Maine and then driving 9 hours tomorrow to go home!!!! I’m ready to go home!

There are a lot of spelling error probably but oh, well.